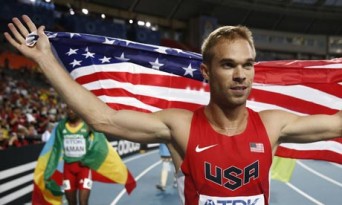 After coming in second in the Men’s 800m, Nick Symmonds dedicated his medal to LGBT friends. (Photo: Franck Fife/AFP/Getty Images)

After winning a silver medal at the World Track & Field Championships in Moscow on Aug. 13, American middle distance runner Nick Symmonds openly dedicated the victory to his gay and lesbian friends in his home country. The act reportedly makes Symmonds the first athlete to critique and oppose Russia’s anti-gay legislation while in Russia.

“As much as I can speak out about it, I believe that all humans deserve equality as however God made them,” said Symmonds in a statement after taking second in the 800-meter race, notes Russia & India Reports. “Whether you’re gay, straight, black, white, we all deserve the same rights. If there’s anything I can do to champion the cause and further it, I will, shy of getting arrested.”