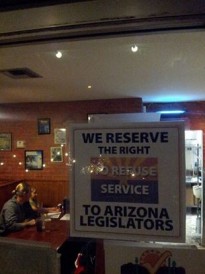 An Arizona pizzeria posted a sign reading stating they reserve “the right to refuse service to Arizona legistlators” in response to a discriminatory bill that threatens the rights of the lesbian, gay, bisexual and transgender community. Owner Anthony Rocco DiGrazia told The Huffington Post Friday in a Facebook message: “Opening the door to government-sanctioned discrimination, regardless of why, is a huge step in the wrong direction. Thanks for all the support.”

This week, both houses of the state legislature passed Senate Bill 1062, which gives Arizona business owners the right to deny service to gays and others on the basis of religious freedom. While conservatives contend the legislation is meant to prevent discrimination against the faithful, Arizona Democrats say it is plain old discrimination. 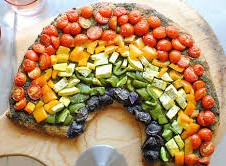