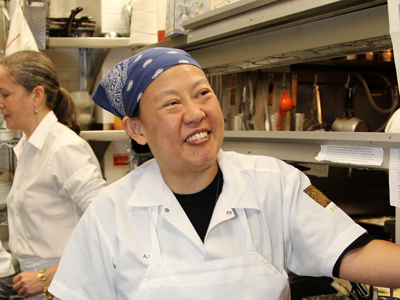 Food festivals all over are making room for and celebrating women chefs, farmers, mixolgists and sommeliers and Hawai’i’s third annual Food and Wine Festival in Maui and Oahu, Sept. 1 – 9 isn’t any different.

Celebrity Chef Anita Lo was the only female chef invited to prepare a tasting at the festival this week, but she joined other women chefs for a special brunch Girls Got Game +1 Sunday, Sept. 8.

Anita is one of Bravo TV’s “Top Chef Masters” and she has earned a titanium star for being not only the first female chef to compete on “Iron Chef America,” but she had the audacity to be one of the few chefs to defeat fellow New Yorker Chef Mario Batali.

Anita and many other women chefs cooked up locally grown and born and raised produce, poultry and meat by women farmers at the all-girl affair at the Hyatt Regency Waikiki Beach Resort and Spa (2424 Kalakaua Avenue, Honolulu, Oahu, 808-923-1234, Waikiki.Hyatt.com).

Girls That Roam caught up with the worldly chef Anita during a pit stop in New York in between gallivanting around the globe to chat about women chefs and her culinary and global adventures.

The special attention on women chefs is a blessing and at the same time a very perplexing and complicated issue.

“The fact that there are so few women in this industry, especially at the top, it needs to be addressed,” says Anita, 47, pointing out that people need to think about how they are raising and educating kids from schools to the media about gender roles.

The deficit of women in professional kitchens and owning restaurants isn’t because there is a lack of women attending culinary schools. This isn’t 1950s Le Cordon Bleu where Julia Child was the lone female in the professional culinary classes.

“There has always been a very large presence of women in the cooking schools, but then once they get out they are not pursuing careers in the restaurants,” says Anita, who has gone to cooking schools and judged finals and seen emerging women chefs. “I don’t know what they are doing with it after that.”

She believes that one of the issues is that there aren’t very many role models.

“There aren’t a lot of role models,” says Anita, who went through her own hazing as well as being treated like a “girl,” which was sometimes nice and sometimes annoying, she says, as she was coming up in the kitchen. “It’s difficult. There’s not a lot of encouragement, especially when you are in an all male kitchen. I think that a lot of sexism still exists like [that] everywhere.”

She carefully selected her battles and stayed focused on the food.

In her own way, she celebrates herself and women. As the mastermind owner and executive chef behind one of New York’s top rated restaurants, Annisa (13 Barrow Street, 212-741-6699, AnnisaRestaurant.com), which means women in Arabic, she purposefully also selected women vintners to feature on the restaurant’s wine list.

“It’s a celebration of women in wine,” says Anita. “Each wine that we have on the list [is] important women.”

Anita counts one of her biggest successes not only opening Annisa since it opened in 2000, but reopening the restaurant after a kitchen fire that threatened the life of the restaurant in 2009. Annisa closed for nine months. It was a challenging period, but nearly a year later the restaurant reopened with nearly all of its 23 employees returning. In 2010, Anita bought out her then business and life partner.

“On many occasions I thought that we weren’t going to reopen” says Anita, recalling those dark months. “I’m just so grateful to [my staff] and that’s what made me feel accomplished.”

Anita has since moved on and has been seeing another chef for a little more than a year now. She declined speaking about her girlfriend preferring to honor her privacy.

Anita was fresh from a six-day exploratory Alaskan trip when Girls That Roam caught up with her. She was in Alaska checking out the fisheries and fishing with a group of food journalists and other chefs courtesy of the Alaska Seafood Council, which she is also a board member on the council.

She was seriously impressed with Alaska’s fishy offerings.

“It was really impressive,” says Anita about the management and the sustainability of the fisheries. 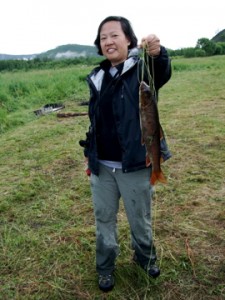 “It was just incredible!” continues Anita. “I’ve never fished like that where it was so plentiful and so many different species. Each time we caught something they explained how they managed the species and everything.”

If Anita could travel the world fishing and cooking she would.

“I travel a lot. The last couple of years I’ve been traveling a ton which has been great,” she says about her adventures to Brazil, Canada, Cuba, Italy, Mexico, Senegal and various food and wine events around the U.S. that she’s been invited to attend thanks to her Bravo TV and Food Network fame. “The past couple of years have been amazing.”

Anita has even been to Moscow, Russia, but she won’t be going back anytime soon due to the countries recent anti-gay laws, she says, “but that was amazing.”

Inspirations from her adventures often end up being served to her guests with her own special twist at Annisa.

She brought back a pepper from her journey to Senegal that she is currently using in a dish.

“I brought back a pepper that was from there that is really, really interesting, that is really floral that I’m using that in a dish right now,” says Anita, who is also the author of “Cooking Without Borders

Not all of her dishes on her menu are immediately influenced by her travels.

“Sometimes you get the idea and it doesn’t get fruition for a couple of years,” she says, talking about a Turkish inspired desert that took some time to appear on her menu.

Peppering her dishes with flavors of the world actually makes her menu American, at least in her mind. Anita, who is a second generation Chinese-American born in Michigan, vision of American cuisine is very multicultural, which “reflects this very large nation that was built by immigrants,” she says.

“A lot of people think of American as hot dogs, hamburgers, apple pie — Germanic dishes — and that’s not the truth,” says Anita, who says that’s only one part of what makes American food American. “I’m a big preacher of diversity.”

Anita should know, she’s traveled widely throughout the states all of her life. She loves exploring the world.

“We traveled a lot as kids,” says Anita, who got an early taste for exploring the world popping in and out of destinations at 24-hour intervals.

From brief introductions to longer acquaintances, Anita finds something endearing and unique about each destination she’s been to, she says.

“I can’t even think of one place that I wouldn’t want to go back to,” says Anita, who begins adding cities and countries from Africa to Central and South America to Europe and around the U.S. that she’s been to as if she’s preparing a dish to serve up.

She is dying to return to Japan to go fishing on the countryside.

“I’ve been to Japan several times, but I haven’t really seen the country side,” she says. “I would love to go see some of the beaches there and go fishing. I think that would be incredible.”

Even in the U.S. there are many places that she would like to continue to explore. Chicago never gets old for her in spite of her many trips to the Windy City as a member of the Culinary Roundtable there.

She would also love to return to Seattle and actually catch a fish at Pikes Place Market.

“It’s such a huge world,” says Anita. “There are so many places I would love to go to.”

She still hasn’t made it to Australia, India, Jordan or Morocco or even Austin, Tex., she says.

“I would like to go anywhere that I haven’t been,” Anita concludes.

Whenever she lands somewhere the first thing she likes exploring is a city’s market — be it a farmer’s market, grocery store, or open air market place.

“It never gets old,” she says. “I have pictures of dead fish from I don’t know how many different countries.” 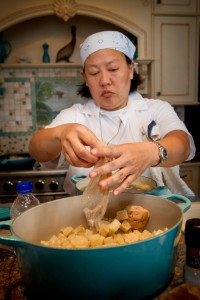 It’s hard to stay away from food when you grow up in a family that has an overwhelming passion for all things gastronomic.

“I came from a food obsession family,” says Anita, but it wasn’t until she went away to college that the passion for preparing food took hold of her. “I was learning how to cook for myself in college just out of necessity and I really loved it.”

Add in the fact that she was in Paris, France at the time earning her degree in French at Reid Hall, Columbia University’s French language institute, and it is almost a, “Oh, well that explains it all,” moment.

“I always loved to eat and I was studying French at the time,” Anita continues. It doesn’t hurt that food is everywhere, chefs are revered, and her older sister cleared the path with her tales of her adventures of studying and taking cooking classes in France.

That is how she discovered and evolved into a renowned chef.

“I think that the profession chooses you to some degree [and] you choose it,” says Anita, “but cooking is something that I just really am obsessed with.”