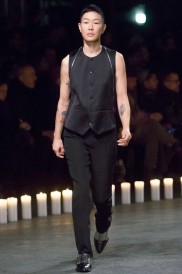 Almost one year ago Time magazine introduced us to Casey Legler, a French former Olympic swimmer-turned-model. What made Casey so interesting on the catwalk was she was working in the men’s shows, modeling alongside males in pants and sweaters and leather jackets. Androgyny has most often been part of women’s fashion, with Jenny Shimizu‘s cropped-do and overt masculinity making Calvin Klein a boundary-pusher in the ’90s, and more recently Andrej Peji donning both menswear and womenswear for designers like Jean Paul Gaultier. But the new trend of late embraces androgynous women crossing over into clothing created for the opposite gender, as fashion is still, unfortunately, clearly described and divided by these specific lines.