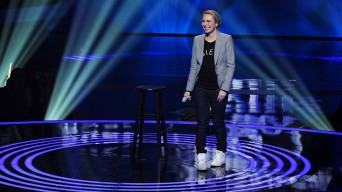 M.K. Nobilette after the “American Idol” Rush Week performance that landed her in the Top 13

“American Idol” revealed its Top 13 contestants Thursday night and MK Nobilette was among them.

Perhaps demonstrating that the country is ready for its first openly gay “Idol,” Nobilette was one of the 10 contestants named to the final group based on votes received after performances earlier in the week. Rounding out the Top 13 were wild card picks selected by the judges, Jennifer Lopez, Keith Urban and Harry Connick, Jr.

Earlier this season Nobilette publicly came out, telling the judges, “I’m very obviously gay. And there are always going to be people in America and everywhere else who are definitely going to hate. But I think in the last two years there have been a lot of things that have definitely changed that, and have really made it a positive thing.”

Lopez responded by telling the San Francisco-based singer that, “The world is changing, I think,” a phrase now echoed by Nobilette fans online.

It remains to be seen how much the world has changed and if America can accept a lesbian contestant who clearly isn’t letting the Hollywood stylists change who she is. Nobilette accepted her appointment to the Final 13 donned in jeans, a white t-shirt, black leather jacket, black baseball capped with the bill turned to the back and what appeared to be Timberland boots, jubilantly high-stepping her way across stage to join the other finalists.

“American Idol” continues next Wednesday on FOX at 8p.m. ET/PT when the Final 13 perform.