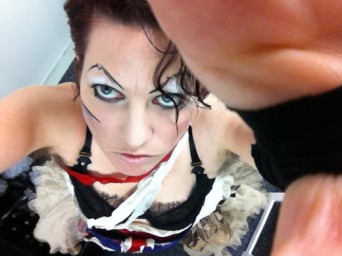 Amanda Palmer’s The Art of Asking: Empathy, vulnerability and shamelessness

Amanda Palmer’s Kickstarter raised over a million dollars, her TED talk has over 3 millions views and the book based on it, “The Art of Asking,” is a New York Times Best Seller. Yet Palmer is a polarizing and controversial figure. Much of the criticism she has received comes from her “shameless” willingness to ask.

“The Art of Asking,” like the TED talk that spawned it is, as you would expect, about asking for things you need or want from people who are willing and able to provide them. What makes it a fascinating and complex read is that this is not a book about how easy Palmer finds it to ask, in fact we get a number of glimpses into her inner struggles as she tries to make her peace with accepting assistance.

This is a book about how hard it is to be vulnerable and to trust people, and about how rewarding it is to overcome these feelings and simply “take the donuts” — a delightful phrase coined in reference to the fact that when Thoreau wrote Walden in supposed rustic conditions, he was also receiving packages of baked goods from his family.

As Palmer tells the story of her career — from humble street performer beginnings to international rock star — she reveals the agony she went through at each stage, as an independent woman learning she must depend upon others sometimes. Through a series of personal anecdotes and musings on culture, Palmer relates her own reluctance to “ask” to a wider societal cringe at vulnerability, which prevents us from asking for what we need.

Palmer’s immense capacity for empathy is evident in every part of the book. She renders her nearest and dearest in bright, complicated colors, imbuing them with a texture that could easily be absent from the subjective exercise that is memoir. This is particularly interesting in light of the “shameless narcissist” accusation thrown at Palmer by her critics.

Her rapport with her fans is often regarded as some kind of cult, Palmer cast as a deceitful pied piper, fleecing her wide-eyed and innocent fans out of their money and love. As the book makes abundantly clear, her fans are so very loyal because she is such an expert at creating moments of true human connection.

From her early days with the Dresden Dolls she has maintained a confessional personal blog, trusting her fans with the gory details of her life, and has made a point of connecting genuinely with fans after shows.

Her mentor Anthony Martignetti, a therapist who lived next door to her as a child and who features prominently in the book, advised her, “You can’t ever give people what they want. But you can give them something else. You can give them empathy. You can give them understanding. And that’s a lot, and enough to give.”

In the book, this understanding is exemplified over and over, but two perfect examples are the stolen ukulele and the fake earthquake girl. In one anecdote Palmer’s beloved battered ukulele is stolen by a couple of British teens and when the two return it the next day, full of embarrassed apologies, she embraces them and tells them stories of her own humiliating forays into teenage shoplifting.

In the other story, more heartbreaking, she relates finding out that a fan she and the community tried to help, who claimed her whole family had been killed in the Christchurch earthquake, was a fraud. Palmer’s response — “I hope she is OK. Anyone who was unhappy and unhinged enough to pull a stunt like that clearly needed love.” — shows an admirable willingness to empathize with even those who have wronged her.

This very capacity for empathy has, however, gotten her into trouble more than once. A native of Boston who was living in the city at the time of the bombings, she penned a stream of consciousness poem on her blog, named “Poem for Dzhokhar,” which set the internet ablaze with Amanda-hate. Some were shocked and offended that she would write something about the subject so soon, seemingly trying to capitalize on the tragedy.

Though this was clearly not her motive, these commenters did have a point and it was, as Palmer herself has admitted, not a very sensitive move. The most troubling arguments; however, specifically objected to the empathy and compassion for the bombers the poem seemed to show. As she relates in the book, a TV news commentator called it “Amanda Palmer’s love poem to a terrorist.” Some said that perhaps this tendency toward empathy had gone too far, about which Palmer writes, “To erase the possibility of empathy is to erase the possibility of understanding … to erase the possibility of art.”

An interesting point raised, though not explicitly stated, in the book is that in order to ask — for a loan, for a raise, for a hug — we must make ourselves vulnerable. Palmer has a lot of practice at this, having spent years of her life dressed in a wedding dress and standing atop a crate as a living statue.

She was driven to create “The Bride” by a yearning to be “seen, understood, accepted, connected” and found these things in the small encounters she had with the passers by who gave her a dollar and took the flower she sprang to life to offer them.

“The Bride was so easy to love. She was silent. She was blank, harmless, beatific … just loving people and giving them flowers.” Palmer didn’t want to be silent, she wanted to be loud, and so came a whole new level of vulnerability, as she exposed her innermost anxieties at the piano with the Dresden Dolls.

Soon she began to trust her fans and try out her now well-practiced art of asking on them. She asked them to catch her when she dove nightly into a sea of hands at shows, she asked them to trust that she would deliver the album and assorted goodies that her Kickstarter campaign promised and she asked them to give her a place to rest her head, sometimes at short notice.

“Crowdsurfing is like couchsurfing is like crowdfunding. You’re falling into the audience.” Sadly, making yourself that vulnerable is one hell of a trust fall and occasionally nobody catches you.

At a Kickstarter party, Palmer stripped naked (as she is known to often do) and allowed fans to write all over her body in Sharpie. When a fan who’d been stalking her all day took an innocent moment too far, touching her inappropriately, Palmer was shaken but chose to see it as “the exception that proves the rule”; “there is no trust without risk”.

Another uncomfortable emotional state “The Art of Asking” touches upon, one which has a connection to vulnerability, is shame. The book’s foreword was written by fellow TED-talker Brené Brown, a shame researcher whose best-selling book “Daring Greatly: How the Courage to Be Vulnerable Transforms the Way We Live, Love, Parent, and Lead” explores the link between shame and vulnerability. Brown believes that “empathy is the antidote to shame” and this may explain why Palmer is so lacking in the latter.

In a section on being called “shameless” by her critics, she writes, “I decided to take that as an unintended compliment. Wasn’t shame … bad? Like fear? I mean, nobody uses “fearless as an insult.” Being “shameless” is what allows Amanda Palmer to embrace empathy and vulnerability so keenly and, in turn, what makes her so good at the art of asking.