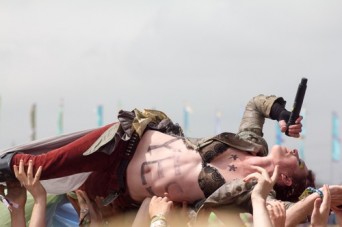 A photo from an infamous performance in Glastonbury via AmandaPalmer.com/@michaeleast

Ever the avant-garde and expressive artist, Palmer’s body of work is varied; her live performance is brazen and imperfect. Despite her reputation for the theatrical as a performer, Palmer the person is down to earth, both in her energy and in conversation. It’s clear that this grounding gives her the capacity to be all of these things. It’s a filthy habit to define things in order to make sense of them, and to do this to Palmer is not only an insult–it’s almost impossible.

No doubt Palmer’s seasoned fans are unsurprised by her ability to push the envelope. Her constant capacity to try new things and stand at the front line of provocative women is her trademark. “I don’t claim to have the answers to the questions but I know that raising them is essential, just like life. Even if you never get to the answer you don’t stop asking the question,” she says. She will incorporate nudity on stage and invoke the challenges of theatricality and poetry to inspire. “Because it feels like it’s about something larger than me.”