BY NICOLE CLAUSING
Girls That Roam

What to eat for dinner tonight? Tapas to make Penelope Cruz weep? Fusion tacos? Pizza fired in a wood-burning oven imported from Italy? Or maybe just the best turkey sandwich you ever had? The wealth of choice gets overwhelming when you’re in a foodie town like … Orlando.

That’s right; the town best known for a four-fingered mouse who doesn’t eat much of anything has spawned quite a food scene. There is offbeat funkiness to please the toughest San Francisco Mission District hipster, and gourmet quality to reward epicureans for not fleeing to Miami. If you’ve been letting a fear of heavy fried Southern food or pallid lowest-common-denominator offerings keep you from Orlando, hesitate no longer: Orlando’s dining options are putting the shine back in the Sunshine State.

Let’s assume you decide you want something somewhat upscale, creative, and maybe even locally sourced. A good cocktail and/or a decent wine list wouldn’t hurt, either. Your best bet is Winter Park, a posh suburb of Orlando.

The town’s Park Avenue is lined with gourmet restaurants and wine bars, but the jewel in the crown is undoubtedly Prato (124 N Park Ave, Winter Park, 407-262-0050, events@lumaonpark.com, Prato-WP.com). The spot is named after a city in Tuscany, and is about as far from lasagna and Chianti as you can get. The owners have imported a pair of custom-made Acunto pizza ovens from Naples, which they use to turn out crackly-crusted beauties ranging from the traditional Margherita to more adventurous creations such as butternut squash and sage pizza, and pies topped with sheep’s milk cheese and egg. A whole meal could also be made from outstanding antipasti such as tender octopus in a squid-ink vinaigrette, and fresh chickpeas with lemon and garlic. The traditional-with-a-twist theme continues at the bar, where familiar combinations such as vodka and cranberry might be spiked with basil, habanero bitters, or lava salt. Most progressive of all, Prato is committed to supporting local providers, and a large hand-drawn map of the state at the front of the restaurant shows the location of the many Florida farms Prato has teamed up with. 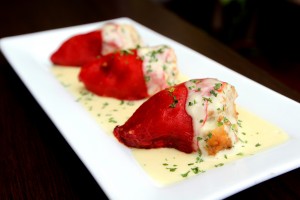 In Orlando proper, downtown’s Church Street is home to Spanish-themed Ceviche (125 West Church Street, 321-281-8140, Ceviche.com). The large, warmly lit space features a lovely hammered-tin ceiling, and is dominated by two bars: One for cocktails, and a central island offering a stunning array of cold tapas. Warm tapas are ordered off the menu, and really show the kitchen’s genius. On paper, offerings like Serrano ham with Manchego and aceitunas y pimientos don’t sound that different from the bar snacks of Spain, but here tapas is not just to tide you over for a late dinner. Here, tapas is dinner, and each plate is made with the highest quality ingredients. The restaurant’s namesake ceviche bowls are outstanding. Traditional shellfish and pulpo please purists, but tuna with lime and onion has a taste of Hawaii, and Ceviche a la Rusa includes oysters and is served with a shot of Russian Standard Vodka. The food at Ceviche is diverting enough, but there is also live music most nights, usually of the flamenco variety.

The City Beautiful Gets Funky

Now maybe it’s later in the evening. Maybe cocktails have already been consumed. Maybe you just don’t want to change out the sensible shoes you tromped around Universal Studios in. A sandwich from Pom Pom’s Teahouse and Sandwicheria (67 North Bumby Avenue, 407-894-0865, PomPomsTeahouse.com) will certainly fill you up and may just change the way you feel about sandwiches, as well.

The restaurant is the brainchild of Pom Moongauklang, who was born in Thailand, raised in Orlando, and shaped by adult years living in other cities, including New York. Her pan-ethnic background shows in her sandwiches, which might include ingredients ranging from yellow curry to salsa to peanut butter and banana. Probably the best place to start is with Mama Ling Ling’s Thanksgiving, a hot, savory starch bomb that features turkey, stuffing, potato, cranberry sauce, and cheese. It comes with a side of brown gravy for dipping and tastes like Thanksgiving, or like Thanksgiving would if it came with fewer stressed-out relatives and more blue-haired students and funky artwork.

To really see Pom’s fusion skills in full bloom, though, make a visit to her other Orlando endeavor, Tako Cheena (932 N Mills Avenue, 321-236-7457, TakoCheena.com). The tacos (“takos,” here) are served with traditional soft shells, but the fillings are anything but. Panko-crusted cod takos resemble the Baja version but sweet and sour sauce takes them somewhere else entirely.  Peanut chicken and gingery, cilantro-laden pork belly pockets taste like a backpacker’s tour of Asia wrapped in tortillas. Anything but gimmicky, the Mexican/Asian flavors complement each other in ways that will astound the most jaded foodie. 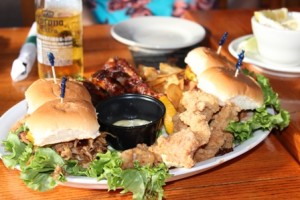 A Snack on the Wildside

Ever bite a gator? If it never occurred to you that human/alligator chompings could go both ways, try the happy-hour gator plate at Wildside BBQ Bar & Grille (700 East Washington Street, 407-872-8665, WildsideBBQ.com) in the colorful Thornton Park neighborhood. Alligator is a white meat that tastes and chews something like lean pork, and goes well with beer.

To what does Orlando owe this surprisingly diverse food scene? Probably the fact that, like Disney World, Orlando lures visitors from all over the world—but Orlando’s new arrivals come to stay. The city is growing faster than any place in Florida save Miami. Some of these new arrivals are first-timers, but many are boomerangs, who, like Pom, tried other places but somehow found themselves back where they started.

How does this happen? What about this city best known for its vacation-from-reality theme parks attracts and sometimes recaptures people from all corners? I asked Pom, and her answer may surprise anyone who assumes that Orlando is as lacking in a sense of place as the fantasy lands that made it famous. “Well,” she says, smiling as she refilled my cup of Rooibos, “There’s no place like home.”

Nicole Clausing first flew at the age of two months, an evacuation from her Kentucky birthplace to Western Massachusetts, where she was raised. Since then, she has lived in seven states and visited more than 30 countries.