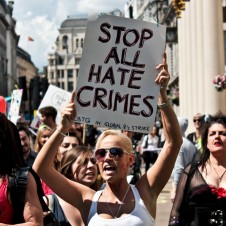 An alleged rape on an Orlando woman outside of an LGBT nightclub Aug. 25 is being investigated by local authorities as an anti-gay hate crime. According to local news outlet WFTV, the victim was walking home from popular LGBT nightclub Revolution when she reportedly stopped under an overpass to give change to a homeless man. The victim, whose name has not been released in the media, stated that a car then pulled up carrying three men and one of the occupants allegedly pushed her to the ground. The driver then allegedly raped her while making homophobic slurs.

“They made statements indicating their desire to punish her for her sexual orientation,” stated Sgt. Jim Young in the above video. According to the police report, the attackers called the victim a lesbian and said, “I’ll show you how a real man feels.” This summer has seen a dramatic spike in anti-LGBT violence in other parts of the country.