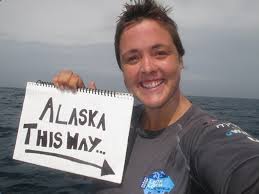 Sarah Outen at sea (Photo via the Independent)

Adventurer Sarah Outen, twenty-eight, has become the first woman and out lesbian to row from Japan to Alaska. Outen began her journey in Choshi, Japan on April 27. After spending five months alone on the sea she arrived in a small town in the Aleutian Islands of Alaska on Monday, September 23.

On her journey a few momentous events took place. She capsized five times, was circled by a shark—and got engaged to her girlfriend via a satellite phone call in the middle of the ocean.

In 2009 Outen rowed alone from Australia to Mauritius, becoming the youngest person and first female to row solo across the Indian Ocean.