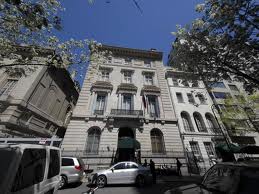 On Wednesday, about 100 activists crowded behind a police barricade across the street from the Russian consulate in New York to protest a slew of anti-gay laws signed into Russian law just as the country prepares to host the 2014 Winter Olympics.

Russian and American gay rights activists held up rainbow-painted signs outside the Upper East Side building, chanting protest slogans. They want the Russian government to repeal the “anti-gay propaganda” law that threatens openly gay (or “pro-gay”) citizens and foreigners with fines, arrests and possible jail time. The group also is pushing for a boycott of all Russian products, in particular, Russian vodka; a boycott of the Olympics in Sochi; and for corporate Olympic sponsors to withdraw sponsorship.