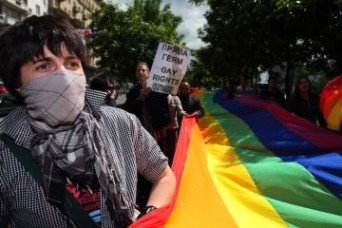 A member of a Russian LGBT rights group that was fined under the country’s “foreign agent” law said on Friday the ongoing gay crack down in Russia seeks to “shut down any kind of possibility for LGBT advocacy.” “These laws are aimed at driving LGBT people back into silence, back underground, back to the invisibility,” Polina Andrianova of Coming Out, a St. Petersburg-based advocacy group, told the Washington Blade. “That’s the whole point of them.”

“The propaganda terminology is so vaguely defined that nobody knows what is right or wrong to do,” Andrianova said. “All I know is it has something to do with me being openly gay. If I am on the streets and I hold hands with my girlfriend or kiss my girlfriend — something that any heterosexual couple can do at any time — I’m afraid now that somebody will call the police. Some mother with a child will call the police and the police will arrest me and harass me.”