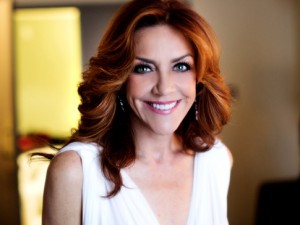 Broadway star and Tony-nominated actor and singer Andrea McArdle fell in love with music in her family’s Philadelphia home. She would tune her parent’s two stereos to her favorite stations and sing-a-long to the decade’s greatest hits.

“We were somewhat music freaks, very eclectic taste. That’s what really gave me my love of music,” recalls Andrea, whose family didn’t have a television until she was 7-years old.

Nearly 40 years later, Andrea is paying tribute to the music that shaped her childhood and Broadway career.

“These are all of the songs that really hit me so hard that made me want to sing,” says Andrea, 49, about the 14 songs that create “70s and Sunny: Live at 54 BELOW

,” her new album from Broadway Records.

The CD was recorded at 54 Below (254 West 54th St., 54Below.com) in New York at the beginning of this year and released April 9. Its cover is so ‘70s with its campy and cheeky photo of Andrea sipping Tab with a straw out of the iconic can.

The lineup of songs include her pop favorites from the 1970s, such as “Rainy Days and Mondays,” which was also the title of the first 45 record she bought when she was a kid, and her own Broadway hits, like “Tomorrow”.

“It was fun taking a trip down memory lane,” Andrea tells GirlsThatRoam.com. The music was “just poetry and art” recalling the writing that made ‘70s music, “just really great pop writing.”

“It was exactly what the ‘70s were. It was dirty and innocent compared to now, but I remember New York [being] really seedy, probably like a night in Bangkok,” she continues.

San Francisco audiences will get a chance to catch Andrea’s trip down the gritty streets of ‘70s New York through her personal soundtrack live Aug. 23 and 24 at Feinstein’s at the Nikko (222 Mason St., 415-394-1111, HotelNikkoSF.com/Feiinsteins.aspx).

Andrea modeled her famous song, “Tomorrow,” as the original Annie on Broadway after 1970s male pop stars, she says.

That song she belting out as the little redheaded depression era orphan Annie has since become an American classic.

“Annie” took her on the road to London where she launched the show’s West End production.

It was the first in a career of playing spunky, headstrong, independent women on and off Broadway that have been her trademark and taken her around the world.

“I was known for being feisty and that is exactly why I got the role of Annie,” says Andrea, who never got the Barbie commercials, but the Band Aid and Brownie paper towel spots because she was a self-described rough and tumble kid.

Since then she has played Mama Rose in “Gypsy,” Sally Bowles in “Cabaret,” Eva Peron in “Evita” and Belle in “Beauty and the Beast,” to name a few performances in her amazing career.

Some of her favorite feisty roles are Belle in “Beauty and the Beast,” which she originally believed she was being called to audition for Mrs. Potts, she says. She was 37-years old at the time and ended up being Belle for two years. Her second favorite is Sally Bowles in “Cabaret,” but her favorite role to-date hasn’t made it to Broadway yet. She just completed a three month run as Mame Dennis in Jerry Herman’s musical adaptation “Mame” of the 1955 best-selling novel “Auntie Mame” in her home state Pennsylvania.

The only other role that she’s coveting right now is Mrs. Nellie Lovett in “Sweeny Todd.” “I like dark musicals,” says Andrea.

Andrea knows that she hasn’t matured into the roles that she’s eyeing within the next few years. She’s still youthful and fiery and she knows it. To keep her vocal cords in tune and the feel of the stage beneath her feet, she’s focusing on a musical career and looking for roles in plays, movies and television until she can return to her beloved musical Broadway.

As much as Andrea loves Broadway, she loves going out on tour.

“As fun as it is on Broadway, it’s definitely as much fun to go on a national tour because it really is kind of like a year of a fantasy world – room service, as many towels that you want, all of the museums and beaches — it’s fun,” says Andrea.

Traveling while working is her preferred way to travel because it automatically gets you out of the “tourist mentality,” she says.

Unlike rushing to see all of the tourist attractions and museum exhibits with your tour book in hand, traveling while working provides the opportunity to live like a local and explore places that are unique to the destination.

Andrea recalls during one of her trips to Tokyo, where she’s performed “Cabaret” three times in the city, taking the subway to places without a map and exploring local villages.

“I’m in love with Japanese culture. I love Tokyo,” gushes Andrea. “I can’t wait to go back.”

While she yearns to return to Tokyo, she can’t believe that she hasn’t been to Italy.

“I can’t believe I haven’t been to Italy yet,” says Andrea, whose younger brother goes with his Italian girlfriend twice a year. “I’m dying to go.”

Unfortunately, Andrea is always working when they go, she says. But one of these days timing will work in her favor.

She wouldn’t be sad to get a gig in Australia, another country high on her list to visit.

There isn’t a moment Andrea regrets about the first half of her life. Her world was just as exciting as the music that formed the backdrop.

It’s only fitting that Andrea pays homage to her youth and the music that inspired her and shot her to fame as she nears half a century with her first record release “70′s and Sunny: Live At 54 Below.”

Her next turn with Broadway Records is “Calendar Dreams,” which explores the trajectory of a year in a woman’s life. The title of the album is an anagram of Andrea’s name created by her friend Scott Logsdon. Each song represents a month and the final song an overview of the year. The 13 songs are being composed and written by some of Broadway’s top composers and writers today.

The album, which doesn’t have a release date yet, is based loosely on Andrea’s own experiences as a newly single mature woman with an adult daughter, Alexis Kalehoff, who followed her mother’s lead.

Andrea’s stories include playing dice backstage with the other actors as a kid, sitting with powerful women such as Cosmopolitan Magazine’s late editor-in-chief Helen Gurley Brown, her own producer on “Search for Tomorrow” the late Mary-Ellis Bunim, former first lady the late Jackie Onassis, Ms. Magazine co-founder Gloria Steinem and journalist Barbara Walters; and how the late Michael Jackson showed up at her 14th birthday party.

“I was a child of the 70s,” says Andrea. “I remember seeing the influence of these women who were powerful.”

While her parents were very much the model of a 1950s nuclear family with her father who worked for Amtrak, stay-at-home mother, and younger brother, she says, “I was raised to go after my dreams.”

“These are my stories,” she says. “This is my verbal journal.”

Andrea is San Francisco this week at Feinstein’s at the Hotel Nikko. Tickets are $30 to $55.

A version of this article appeared in Passport Magazine’s Broadway Blog.