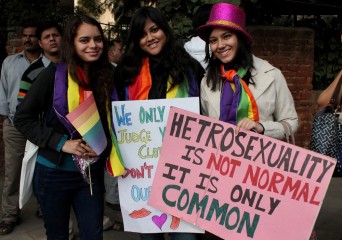 Queer life in India is shifting into high gear creating a new class of LGBT Indians for the 21st century.

“It’s kind of an amazing moment” for India’s LGBTQ community because of the public dialogue about homosexuality and nonconforming gender is “really alive right now,” says Minal Hajratwala, a Fulbright Scholar and author of award-winning “Leaving India: My Family’s Journey from Five Villages to Five Continents

This past weekend, Desi queers gathered in San Francisco to discuss the momentum gained and maintaining it.

The program, “Spice of Life: Growing Up Queer in India,” was spearheaded by Julian Chang, co-chair of the LGBT member-led forum, as a part of the club’s month long series “India Now.” Julian moderated the discussion that was being recorded for DiyaTV, a new 24/7 South Asia network.

The new found public interest in India’s LGBT community within India and the U.S. stems from when the Delhi High Court invalidated Section 377, a sodomy law from 1881 enacted during British rule of India, and 25 years of activism among queer South Asians globally and within India.

India is seeing its LGBT children, many who lied and dodged questions about their relationships and sexuality in the past, beginning to stand up proud and show their true colors within the four years since the court’s ruling. The ruling is being challenged, but LGBT South Asians continue to march out of the closet in India and around the world.

“The biggest thing that I see really happening in India now [is that] there is a public dialogue where before in there was a vast public silence,” says Minal, fresh from a 10-month sojourn in India at the time. Minal splits her time between India and San Francisco. “That’s really exciting to see.”

Minal, who was in India researching her book and editing an anthology of Indian coming out stories, noted several significant trends occurring in India’s LGBT community.

For the first time India’s transgender community is being counted and securing rights, she says. In 2011, marked the first time the government provided the option of “male, female, and other” on the census. Transgender individuals in Tamil Nadu, India’s most urban state, secured a “special status” that provides government benefits and protections to transgender individuals. Trans men are also increasingly becoming more visible, where historically trans women were commonly seen in public, Minal says.

Gay and lesbian Indians are now beginning to live out loud and proud to a certain extent and queer student groups are popping up on college campuses within the past few years. Rather than hiding behind the guise of heterosexual relationships, covert affairs or registering at the bottom of self-identification, queer Indians are beginning to consider sexuality as a part of their self-identity, she says.

“That is a fairly new phenomenon,” that is happening mostly among young middle and upper middle class individuals in urban areas, says Minal, about queer Indians who are making their queerness a part of their personal identity and “structure[ing] their lives around their sexual orientation.”

Minal observes that the shift is due to more than simply legal gains and public awareness of homosexuality. It’s also due to a new influx of financial freedom created by new job opportunities. This has led to newly acquired disposable income and increased freedom away from the watchful eye of family members, she says.

Businesses in urban centers are catching on and going after the “Pink Rupee,” she points to Mumbai Time Out Magazine’s newly launched Q-Card, a subscriber-based discount card consumers can use at queer or ally membership businesses. 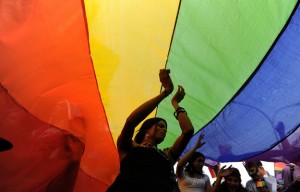 The new climate gave Devesh his “big break” to come out to his mother, he says. Out and very active in the Desi queer community in the U.S., the Pune native, was presented with a Times of India article about two gay men’s commitment ceremony in Mumbai by his mother during one of his visits home, he says.

His mother acted “shocked” about the news, which Devesh found hard to believe, but it opened up a small window for a onetime conversation about his gayness, before moving on with their lives as before the revelation.

“Don’t Ask, Don’t Tell might be dead in the military,” says Devesh, “it still lives on as far as me and my mom is concerned.”

Today’s queer India is a far cry from the recent past where sexuality was never spoken about, gender nonconformity was publicly ridiculed, and there was only one publicly out gay man, Ashok Row Kavi.

For the longest time Indian’s joked that Kavi was the only gay man Indian as he was the media darling when it came to anything queer in India, Rakesh says, as the audience and panelists laugh.

Three of the panelists grew up in India and Minal, who was born in San Francisco, but raised in New Zealand and Michigan, weren’t aware of sexuality or homosexuality until their teens and early 20s they say.

Dipti, a tomboy, welled up with tears describing the pain she endured due to public intolerance once she hit her adolescents and didn’t conform like other girls. The daughter of an officer in the Indian Air Force, it didn’t matter where her family lived in India, she ran into the same harsh ridicule. She was accepted and safe within the confines of her liberal family and eventually at an all-girls boarding school, until her first teenage crush when the taunting started again for another two years, she says.

Dipti’s adolescence “colored everything that I do to this day” and “shaped a lot of where I spend my time today doing my activism,” she says.

“This whole experience of mine made me realize how important it is that we accept each other for who we are. So, my whole adult life has been fighting for making sure not only as queer people, but as South Asians, as people of color, as people who don’t have as much access, that there is a place for all of us,” continues Dipti, who today is, vice president of investments at a major financial institution and serves on community and foundation boards.

Like Dipti, the silence of homosexuality in India and the Diaspora Indian community galvanized Minal, Devesh, and Rakesh into action to build community, provide services, and stand up for LGTB South Asian rights, they told the audience.

In the U.S., Rakesh continued his activism with Trikone, the oldest LGBT South Asian organization which celebrated a quarter century of activism in 2011, and as a co-chair person of the National Queer Asian Pacific Islander Alliance, a federation of LGBTQ organizations, until early this year when he took a break to focus on OMG!, a queer South Asian bar in San Francisco, that he is co-owner.

All four panelists are members and at various times have served as leaders of Trikone. 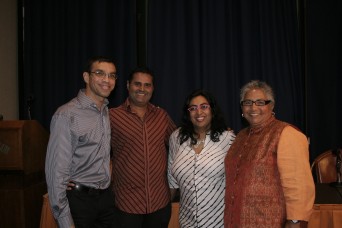 Eye of the tiger

Away from his family as a graduate student in the U.S., Devesh found freedom to discover his sexuality. He also found his activist voice during his quest to find community and a social outlet, says the former technology professional turned nonprofit professional.

Dipti also found freedom in immigrating to the U.S. with her mother in her late teens changing her visions of a “pretty traumatic” life to having a “chance … to do something different and may be have a different life.”

Her first day of school America when she realized that no one cared or asked about her appearance, “I thought, ‘Oh my, I reached the place where I can live and be myself’,” she says.

“I had no desire to go back to India,” Dipti says. A few years later, she recalled the phone call in college that she received from her father after her mother informed him that she was a lesbian, “Okay, I know that you are a lesbian, but please don’t let that interfere with your studies.”

Dipti promptly spend a year discovering bars and staying up all night, “that year [I] don’t think that I went to class,” she says, laughing saying that her father’s support inspired her to be out and proud as a South Asian lesbian.

“I don’t think that lots of my friends have that same support,” says Dipti. “I want to be there and be able to let other parents know that it’s okay if your kid is gay.”

Minal, who was outed to her parents during college and spent years disengaged from her family until she found her way home again, found a new understanding of her own queerness during the process of writing her first book. Queerness is “another kind of migration” a migration away from the “structured traditional world” of her family to a “new and unbounded world in which a lot seems possible,” she says.

But it’s the stories of a new generation of LGBT Indian’s that is inspiring the writer who for more than 20 years has read everything that she could get her hands on that “seemed like it had a little bit of Indian and a little bit of gay in it,” she says.

“I’ve been very hungry for that and I’ve read everything there is to read out there,” says Minal, who is simply “blown away” by the coming out stories by Indian’s that she’s recently edited. “These were stories that I’d never seen anywhere. They are incredible.”

The panelists were optimistic about the future of India’s LGBT community in light of recent progress and protests against India’s Health Minister Ghulam Nabi Azad, who propagated the belief that homosexuality is a disease and foreign import in July 2011. His statements garnered global outcry from queer South Asians and HIV/AIDS experts and organizations.

“I wouldn’t be surprised if there were a lot of like arranged same-sex marriages that start happening,” Rakesh adds, joking about the importance of family and marriage in Indian culture. “Okay, you’re gay, so now let’s find a partner for you.”

Find out what is happening in the LGBT world around the globe at the Commonwealth Club.