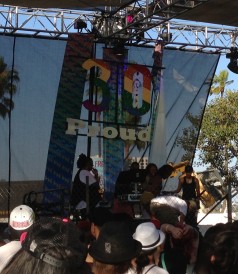 One of the stages — not much going on yet, but things got good! Photo: Lynna Lan Tien Nguyen Do

Every time I travel to southern California, I feel like I’m going home. I can usually get around most of the cities, navigating the roads and freeways without my GPS. So, when this northern California woman had the opportunity to attend Long Beach Pride, I didn’t hesitate! To be honest, I didn’t really know what to expect, but I was told by an expert that it was her favorite (names of comparison cities omitted to protect those less fortunate Pride celebrations). With that in my mind, and my previous experiences with San Francisco, San Jose and Oakland Pride, I was set to experience Pride in southern California for the first time.

Up until the day I boarded my plane to head south, I was wondering how Long Beach Pride would compare to my other experiences. It is always hard to leave assumptions and preconceived notions behind when you are about to embark on something new or the first time. But I knew, no matter what, it would be fun and there was no way it could be unpleasant if I was surrounded with my fellow LGBT community-members and our allies in a celebration of being open and us.

Like most Prides, it is a two-day festival. On Day 1 (Saturday), we walked down to the park and paid our entrance fee ($20). Tickets were for one day and there was no re-entry, so on Day 2, we paid the fee again. I do not remember ever paying to get into San Jose nor Oakland Pride, and even San Francisco only had a suggested donation amount that got you a dollar off your drink purchases. I was disappointed that the fee did not include at least a discount for drinks but once we walked in, I was greeted by the sheer openness and vast space of the festival. It was wonderful to be able to move around! There were several stages set-up in various corners of the park, with each playing a different genre of music. The set-up reminded me of the Castro Street Fair in San Francisco more than San Francisco Pride. With the openness, we were able to check out the booths and talk to the people attending them rather than get stomped on by dancers or other attendees just trying to get from one place to another.

Day 1 was relaxed and chill. I got to see the layout of the park and saw some of the performances on various stages. There were a lot of people, but not so many that it felt crowded. Day 2, however, was another story. If you have to choose only one day to go, Sunday would be the day. Sunday is parade day and after the parade everyone heads to the park to continue the fun and festivities. Although there were a lot more people at the park, it did not feel crowded or overwhelming — another advantage of the open layout of the festivities.

Maybe it’s just me (and the fact I’m from San Francisco, where people are often quite liberal with their bodies), but I was surprised not to see more, well, nearly naked people or people dressed up more flamboyantly. Most of the people who attended were dressed like they would every day, some like they were dressed to impress, and others just trying to exhibit their personalities. I think I only saw one naked person, and that was a woman who had body paint all over and stars on her nipples.

One nice perk was that they sold drink tickets. Tickets were a dollar each and you needed several to buy different drinks. For example, beer was 6 tickets, so $6; margaritas were 7 tickets, therefore, $7. The downside was that I was constantly in line to buy more tickets and as the consumer, it’s easy to lose sight of how much a drink really costs. But I have to give kudos to the organizers, because when people dish out tickets, instead of cash, you stop thinking about the cost of the drinks and you just continue to buy more tickets for drinks and water. The concept is quite ingenious, and I even felt that dealing with less money changing hands was making things at the concessions run more smoothly. My only complaint about the alcohol lines was that we had to show our IDs everytime we got in line, after we had already shown our IDs earlier to get over-21 bracelets.

Another positive of Long Beach Pride, as I’ve mentioned, was the openness and vast layout of the booths and stages. At no time did it feel crowded, unless you were standing in a line for food or drinks, or in dance areas up close to the stages. I was surprised that I could still have conversations with people and actually hear them when they were speaking. Having all this space contributed to a fairly peaceful atmosphere. I didn’t see altercations among attendees and people were co-existing well in the environment. I was also surprised by the lines (or lack thereof, really) for the well-maintained portapotties.

One thing I love about attending Pride is that I am free to be myself and not have to think about my sexual orientation. A successful Pride event is one that does not even make you realize you are at a Pride event, it makes you feel like you are at an event, one that you can enjoy and have fun. Overall, I would have to say my experience at Long Beach Pride was a good one. Lots of memories made and another Pride I can check off on my bucket list!

Lynna Do is also known as Wiki-Lynna to her friends because she retains a lot of random (and not so random) knowledge. A typical Type A personality, Capricorn and political junkie, you can find her on Facebook and Twitter.