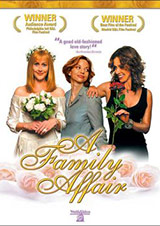 This wonderful lesbian rom-com follows Rachael (played by writer-director, Helen Lesnick aka the lesbian Woody Allen) as she heads west to California and falls head over heels for a blonde massage therapist.

Died-in-the-wool New Yorker Rachel moves to San Diego looking for a new life and a new romance. That’s where her supportive PFLAG parents live. Rachel is surprised to find how they’ve adapted to the laid back California scene, and totally shocked when her mom (Arlene Golonka, “The In Laws”) wants to set her up on a blind date. At first she refuses, but eventually Rachel lets her mother introduce her to Christine (Erica Schaffer, “Three on a Match”).

Soon, she finds herself in a real romance. When the two women begin to plan their wedding, Rachel’s old flame Reggie (Michele Greene, “L.A. Law”) throws a wrench in the works.

“A serious romantic comedy of …strength and substance and so entertaining.” — Kevin Thomas, Los Angeles Times