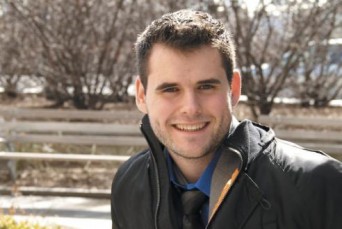 BY KATHY BELGE
LesbianLife at About.com

Zach Wahls became an overnight sensation when the speech he gave to the Iowa legislature in support of gay marriage went viral. The Eagle Scout, raised in a lesbian family, eloquently argued that gay and lesbian families are no different than opposite sex families. That the sexual orientation of his parents had nothing to do with content of his character. Within hours of the video of Zach Wahls’ speech being posted on YouTube, he was being contacted by major media outlets, including the Ellen DeGeneres Show and The Daily Show with John Stewart. The video of his speech has more than 2,000,000 and Zach has just released a memoir “My Two Moms: Lessons of Love, Strength, and What Makes a Family.”

I caught up with Zach Wahls in Provincetown, Mass., for Family Week, an annual gathering of LGBT families after he read from his book.

You’re in Provincetown for Family Week, did you ever have anything like this when you were growing up?

We never did. We had our own family summer get togethers. It was not in Provincetown. It was in Lake Geneva in Wisconsin.

Read more at LesbianLife at About.com