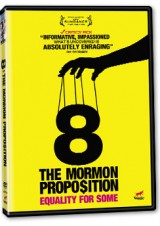 “Amazing! Will knock your socks off . . . could be the movie of the year.” – The Huffington Post

8: The Mormon Proposition is an indictment of the Mormon Church’s historic involvement in the promotion and passage of California’s Proposition 8 and the Mormon religion’s secretive, decades-long campaign against gay rights. The film takes place in California and Utah as Mormons, following their prophet’s call to action, wage spiritual warfare fought with money and lies against US citizens and their fight for marriage equality and the rights that come with marriage.

Michael Moore on 8: The Mormon Proposition: “This is not just a document of a vote gone wrong. It is an emotional, powerful film about the damage done to people whose crime is that they love each other. And when did California become Utah?”

“A vital, important cry for an open dialogue.” – The Salt Lake Tribune