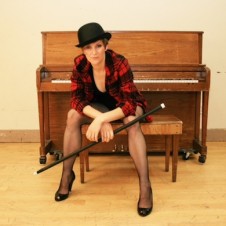 Did you love the musical “Lesbian Love Octagon,” the tale of a broken-hearted butch in the 90s? Well I have great news for you, the creative team behind “Lesbian Love Octagon” is back with a new musical, full of the humor and campy musical numbers that have become their signature. “Lezzie with a Z” was written by and stars Caitlin Lee Reid, is directed by Kimberlea Kressal and features musical arrangements by Will Larche.

“Lesbian Love Octagon” was a Time Out NY’s critic’s pick and Reid is set to deliver on her second outing. NYC queers are familiar with Reid from her performances at “LezCab,” a popular queer-themed cabaret show. Playgoers are sure to see a more vulnerable side of Reid in “Lezzie with a Z” as the play revolves around her real life experience of getting married and divorced by the age of 27. Don’t be worried that the show will be a downer, Reid promises to “strap-on” and “sing out,” while applying her dark sense of humor to her divorce.

“Lezzie with a Z” promises to deliver on piano bar favorites- featuring old standards from musical theater staples. Anyone who has been at Duplex during one of Will Larche’s performances at the piano should know to expect raucous sing-alongs and newcomers should come prepared. Reid, Larch and Kressal prove that musical theater isn’t just for the boys.

Not sold yet? Check out the official website for more information.